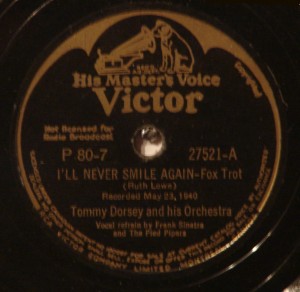 Most of them were her son’s records… and most of the records were albums that all of us who were around in the 70’s and 80’s have… Foreigner, Asia, Blondie, Toto, etc.  Albums that I already own.

Anyway, I had gone through most of them, when I found an older vintage record… a Big Band album from Tommy Dorsey!

I looked at it, and on the “B” side, in the tiniest letters… with as little “TADA” as possible, it announced that the singer was Frank Sinatra!